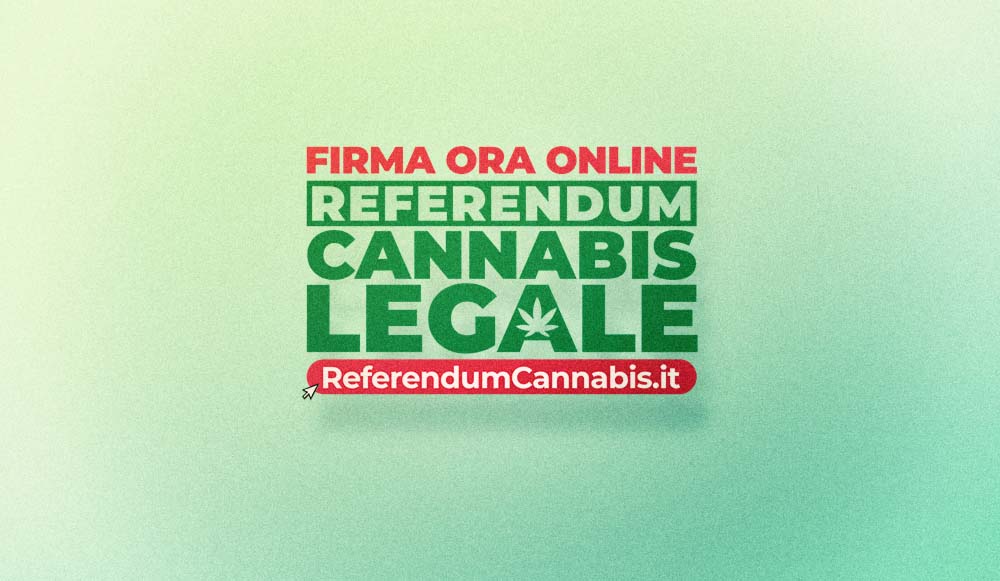 It has been too long now that aficionados and connoisseurs of cannabis have lived in the shadows.

You always have to watch your back when you light up a joint and even more so when you have the space set up for growing. Whatever your position we have news for you!

Following the legalization of cannabis in various American states, in Italy there have been various attempts to bring to the Chamber all sorts of amendments that could concern the regulation or simply the tolerance of the personal use of the cannabis plant. For two days now, signatures have been collected for an abrogative referendum in favor of the domestic cultivation of four cannabis plants. But let's start with order.

What does the amendment envisage?

After more than a year, between hearings and new bills presented, the basic text on cannabis has finally been adopted in the Justice Commission of the House. The parties that have sided in favor are: Pd, M5s, Leu and Radicali, while Forza Italia and Lega voted against together with FdI, while Italia viva abstained. Consisting of 5 articles, the text presented and subsequently adopted by the committee aims to modify the consolidated text of the laws on narcotic drugs and psychotropic substances, prevention, treatment and rehabilitation of the related drug addiction states, referred to in the decree of the President of the Repubblica 9 October 1990, n.309, on the cultivation, sale and consumption of cannabis and its derivatives.

The text was the result of the collaboration between the various positions within the majority and constitutes a synthesis of the three bills presented from 2019 to date promoted by the radical Magi, a second M5s license plate and finally the text first signed by the League leader Molinari. The adopted text includes important changes including:

1) The non-punishment of home cultivation for personal use  and therefore the possibility of being able to grow small quantities of personal use at home, therefore the cultivation of four female cannabis plants. By doing so we will finally have the possibility to choose between the catalogs containing the various genetics that are most important to us and that satisfy our demanding consumer side. The time is still too early to actually know which and if (surely) there will be limits imposed, for example if this will be possible through indoor cultivation in the respective growbox (see here), and therefore with the purchase of specific tools to guarantee a certain quantity and quality of the product. We do not yet know if general limits will be established on the amount of substance that can be held at the same time as it is cultivated. And perhaps it will be necessary to self-report to the authorities when we decide to cultivate.

2) The tightening of pens against those who commit the crime of selling cannabis against a minor. We recall that currently the Italian legal system punishes with imprisonment and a fine whoever cultivates, produces, manufactures, extracts, refines, sells, offers, yields, distributes, trades, transports, procures to others, sends, passes, sends, delivers for any purposes or holds, for sale or transfer, narcotic or psychotropic substances. Therefore, the crime of drug dealing is also configured in the hypothesis in which the transfer of drugs occurs through sale or for free, as can happen between acquaintances and friends, through the transfer or delivery of the substance.

"Whoever, having the authorization to illegally cultivate cannabis, transfers, puts or procures that others market the substances or preparations is punished with imprisonment from 8 to 20 years and with a fine from 30,000 to 300,000 euros [...] Al on the contrary, the penalty is less heavy imprisonment from 3 to 12 years and a fine from € 20,000 to € 250,000, if the illicit activities concern the substances or preparations indicated in table II referred to in article 14, or cannabis "

3) The decriminalization of "minor" crimes and therefore the consequent distinction between types of narcotic substances, will no longer include prison but the possibility of carrying out public utility works. In Italy, currently when a crime of drug dealing is committed, in addition to criminal sanctions, administrative sanctions are also applied such as:

The community service can replace the penalty no more than two times. No reduction (the rules do not apply) in cases where narcotic and psychotropic substances are delivered or otherwise intended for a minor. Finally, offenses and administrative sanctions are abolished, such as the suspension of the driving license.

And now the collection of signatures!

Although the basic text was accepted, it immediately hit a wall, and innumerable changes were presented by the opposition in such a way as to complicate expectations. Following the justice referendum launched by the Lega and the Radical Party, which respectively reached 600 thousand sure signatures, now almost 800 thousand, we are moving towards one million signatures on six questions, some of which are really very technical; And the very recent encore of the collection of signatures at the bottom of the referendum for legal euthanasia of which the driving force was a small association, Luca Coscioni, supported in a personal capacity by some parliamentarians. Thanks to word of mouth alone, this referendum is already traveling towards one million signatures, of which 300,000 are digital, thanks to an amendment inserted straight into the Simplifications dl by the deputy of + Europe, Riccardo Magi, which allows those with Spid and sign digital to vote from home as well. 48 hours ago the campaign for a new referendum question was officially launched, this time cannabis, which after two days of voting reached 220,000 signatures.

The collection of signatures for a referendum on the decriminalization of the use of the plant began only yesterday and must be completed by 30 September, as required by the law. on that of administrative sanctions. To propose it is a group of experts, jurists and militants coordinated by the Associations Luca Coscioni, Meglio Legale, Forum Droghe, Antigone, Società della Ragione. Representatives of the parties of + Europe and Italian Radicals also took part in the proposal. The collection of signatures for decriminalization has an excellent sponsor, the co-founder of M5s Beppe Grillo took the field directly. The founder decided to commit himself to the success of the referendum. Moreover, the battle takes place on a terrain, the online one, of which Grillo is a great expert.

«The Referendum is underway to decriminalize #cannabis in Italy and pave the way for legalization. 500 thousand signatures are needed by 30 September 2021. Sign and get signed!»

The official site for the collection of signatures is referendumcannabis.it where you can sign through Spid or other digital signature tools. The site became operational 48 hours ago after the filing which took place last September 7 at the Court of Cassation by a group of experts, jurists and militants, who have always been committed against prohibition, coordinated by the Associations Luca Coscioni, Meglio Legale, Forum Drugs, Società della Ragione and Antigone. The referendum question referred to the Consolidated Law on the discipline of narcotic drugs and psychotropic substances, referred to in the Presidential Decree 309/1990, was formulated with the intent both to intervene on the level of criminal relevance and on that of the administrative sanctions of a series of conducts relating to drugs. Like any proposal made by the majority, the opposition responds. Also in this referendum it is almost the usual alignment: considered a relevant topic on the left and opposed on the right.

The head-on clash between opposing factions raises fears for the stability of the vast majority that supports the Draghi government. During the week in the Justice Committee there was a split regarding the decriminalization of the cultivation of cannabis up to four plants, mostly for therapeutic use. The promoters underline, as has always been done in the past, that its approval would remove resources from crime but the motivation does not satisfy the center-right that voted against (guess why). The proposal, however, passed with the votes of the Dems and pentastellates. Now the parliamentary move is accompanied by the call of the people. While on the one hand Beppe Grillo, founder of the M5s, invites the Italians to support the referendum, but on the other side Matteo Salvini appears who makes no secret of his total opposition to the legalization of cannabis.

"We will do our battle not to pass the law of Pd, M5s and Leu that allows you to grow cannabis at home to make joints"

announced the leader of the League during a meeting with the citizens of Lanciano, in the province of Chieti. But that of the former Minister of the Interior is not the only voice that rises loudly from the center-right to try to nip the possibility of cannabis being decriminalized.

«Other than self-production for therapeutic purposes, the proposals in favor of legal cannabis come out in the open with the umpteenth referendum, proposed by radicals and former radicals to legalize drugs. This is a serious and irresponsible choice, which we will democratically oppose with the force of truth and arguments. But it is serious that in Italy some politicians are mobilizing in favor of drugs, of death, instead of supporting life, prevention, recovery, health protection. All the more so after such dramatic years in terms of protecting people. […] The referendum - added the blue senator - if it ever goes on, it will be defeated. We have already set up a dense network of presences and organizations to defend the reasons for life against any attempt to legalize cannabis ».

This was said by Maurizio Gasparri, member of the Fi presidential committee. For Gasparri:

«The arguments in support of this proposal are all false and easily dismantled but above all it shows that the attempt to legalize cannabis for therapeutic purposes is only a gimmick to go directly to the broader goal of legalizing cannabis and then later on other drugs. more harmful [...] We will stop them. They will be defeated.»

The new anti-prohibitionist Fabiana Dadone and from M5s , after receiving the proxy on anti-drug policies from the Draghi government, announced close to her appointment to convene the Conference on the diffusion and addiction to drugs that had not been held in Italy for 12 years. It will be held in Genoa on 27 and 28 November 2021, which will discuss drugs. Minister Dadone focuses attention on the "new trends" of youth consumption, which in the impact with the pandemic would show a reality of "alarm and emergency", and on the introduction of the Department of Anti-Drug Policies which clarifies how the central theme is “The massive and generalized acceleration” of the “changes already underway”. We do not know if the end of 2021 can hold us any surprises. Today more than ever there is talk of legalization, but in almost a year the chambers will suspend their work in anticipation of the new administrative elections which, according to what the current exit pols say, Italy could be ruled by prohibitionists within a year. of the center right. It should not be forgotten that the center-right government will certainly be a prohibitionist government and we cannot imagine a worse future for us admirers, for the plant itself and certainly also for the environment and the planet. In this case we are sure we have to say goodbye (for another 5 years at least) to any timid project in favor of legalization, indeed, it seems that the wind can completely change direction to our disadvantage, forcing us to defend with all possible legislative means.

Don't miss news, promotions and novelties on our genetics